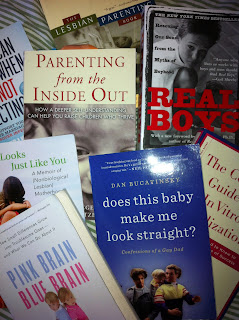 Books:
These are some of the books I like, use and recommend to my clients.

Pregnancy & Fertility:
The Pregnancy & Postpartum Anxiety Workbook. Pamela Wiegartz & Kevin Gyoerkoe, 2009.
What he can expect when she’s not expecting. How to support your wife, save your marriage and conquer infertility. Marc Sedaka with Dr. Gregory Rosen, 2011.
The couples guide to In Vitro Fertilization. Everything you need to know to maximize your chances of success. Liza Charlesworth, 2004.

Parenting:
Parenting from the inside out. How a deeper self-understanding can help you raise children who thrive. Daniel Siegel and Mary Hartzell, 2003.
Finding Our Way. Life with triplets, quadruplets and quintuplets. Edited by Suzanne Lyons, Canada, 2001.
Go The F**K To Sleep. Adam Mansbach & illustrated by Ricardo Cortes, 2011.
Tug of War. A judges verdict on separation, custody battles and the bitter realities of family court. (Canadian) Mr. Justice Harvey Brownstone, 2009.
Real Boys. Rescuing our sons from the myths of boyhood. William Pollack, 1998.
Packaging Boyhood. Saving our sons from superheroes, slackers, and other media stereotypes. Lyn Mikel Brown, Sharron Lamb and Mark Tappan.
Packaging Girlhood. Rescuing our daughters from marketers’ schemes. Sharo Lamb and Lyn Mikel Brown.
Boys on Target. Raising boys into men of courage and compassion. Barry MacDonald, 2012.
Pink Brain. Blue Brain. How small differences grow into troublesome gaps - and what we can do about it. Lise Eliot, 2009.

LGBTQ:
The New Essential Guide to Lesbian Conception, Pregnancy & Birth. Stephanie Brill, 2006.
Who’s Your Daddy? And Other Writings on Queer Parenting. Edited by Rachel Epstein, 2009.
No More Secrets. Violence in Lesbian Relationships. Janice Ristock, 2002.
Does this baby make me look straight? Confessions of a gay dad. Dan Bucatinsky, 2012.
The lesbian parenting book. A guide to creating families and raising children. Merilee Clunis and Dorsey Green, 2003.
She looks just like you. A memoir of (nonbiological lesbian) motherhood. Amie Klempnauer Miller, 2010.

Wellness & Communication:
Non-Violent Communication. A language of life. Marshall Rosenberg, 2005.
30 Scripts for Relaxation Imagery & Inner Healing, Volume 1. Edited by Julie Lusk, 1992.
How You Do Anything Is How You Do Everything. A workbook on self-discovery. 1988.
At Our Core. Women writing about power. Sandra Haldeman Mark,1998. 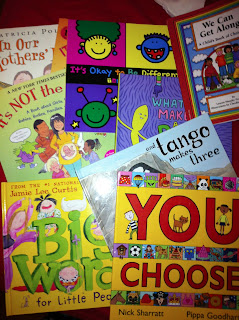